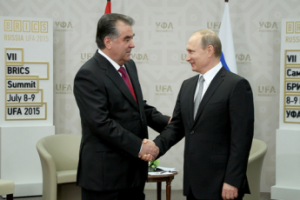 Russia also has highly chairmanship in the Collective Security Treaty Organization, including joint exercises, which was held on the territory of Tajikistan.

President in his turn, stated: “For relations with the Russian Federation stable and unique advantages of this new legal concept of strengthening our country’s foreign policy.” The meeting discussed issues related to the development of cooperation in the fields of politics, security, defense, trade and economy, investment, science and technology and culture.

Particular attention was paid to the issues of cooperation in the fields of security and defense. It was stressed that Russia against threats and dangers of the modern world, including terrorism, extremism and illegal drug trafficking, strengthening the protection of the state border between Tajikistan and Afghanistan and the resistance to information wars should be sustained and continuous integration.

Expressed the hope that bilateral and multilateral plans in the field of technical assistance programs to the Armed Forces, the Border Guard and other relevant agencies to complete.

Head of State President of the development of economic cooperation has been recalled to the Russian Federation, in particular, noted that “Russia was a major partner and investor, because almost 50% of direct foreign investments to the economy comes to your country.” At the same time, it was stressed that “this positive indicator should be not only maintained, but increased.”

Another important theme of the meeting to discuss problems related to the activities of migrant workers in the Russian Federation. From the re-release access to Russia expressed satisfaction with a number of citizens, especially students. At the same time, it was stressed that the work should be continued for another saʙukihoi to migrants and the legal regulation of this process.

In this regard, the subject of amnesty to working immigrants, and more than 2 administrative offenses, legalization of stay of those illegal immigrants are considered and simplify procedures for the presence of Tajik citizens in Russia and the extension of the registration period for students after entering attention to the country’s territory It was a typical show.

A constructive exchange of views also took place on the deepening of integration in the framework of international and regional organizations, including the Shanghai Cooperation Organization and other regional and international agenda.