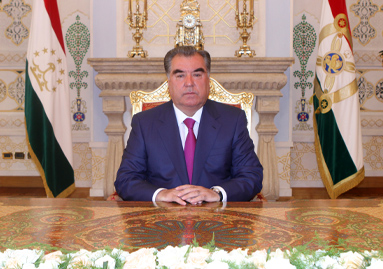 In these moments all of us and you have to disrupt ʙistucorumi anniversary of independence, ie the greatest national holiday.

This independence gives us the historical opportunity that we owning their home country, set up their own national state, the revival of national traditions and values, make our long-standing aspirations of our people and to keep the road free life of our people.

On this solemn occasion, I wish all the people of Tajikistan and compatriots on the occasion of this fateful date congratulated the country’s medium to large peace, happiness and good and to build the house.

Independence at the same time that omolu dream for our nation, as well as moments of thought and analysis of the responsibility of every member of ancestral land is to achieve as much work and creative activity for the present and the future of our beloved homeland.

Thus a high sense of responsibility to the past and the present and future of the motherland and the nation each of us, for the sake of prosperity of our country rest with all you are trying to secure, dedicated and hard fateful, in the protection of national and state interests to be willful, constantly alert, to its credit in the country and the people we paid.

With the understanding of the great responsibility of state and government is to continuously strive to strengthen political, economic and social foundations of the moral foundations of the state independence, devoted to create favorable conditions for the sustainable development of all areas of life and society.

As a result, we are their direct dependence on the vessel over the past two decades a number of fundamental achievements made, the further fate of the independent state.

Our most important achievement in this period to ensure peace, save the verge of the risk of the national state and let the disintegration of our nation’s forgiveness.

For wished without having to get a free state and the historical aspirations of the nation and its goals and its future generation would mean.

Therefore, if you drown in it, that the enemies of the nation on the path of our independent country were created, eliminating went, and the nation will be scattered, future generations would never forgive us.

In the next step we have to spend all the effort that improved governance structure, modern, professional parliament, a competent national army, military and security institutions to create the necessary pillars of the state according to the standards of a new era.

Persons who have gone through this historical path, have learned that revive and require great efforts to restore each of statehood and each falaçşudavu extant structure of the state.

Many other solid step in the creation of the modern state of the proper governance structure.

Based on the historical and political realities of the modern past and taking into account the interests of present and future national and state, people with addictions and with the expressed will vote freely elected democratic, legal and secular state structure, which is now the country’s tight as it will in the first article of our Constitution ever been recorded.

Now steps in the construction of this system.

Existing and tahavvulote experience, that in the modern world today passes, once again proved that the choice of the secular state is correct and farsighted choices today, the same idea has become one of the main foundations of the peaceful life of the community.

At independence the Government has been able to resurrect with the construction of roads, tunnels, nerūgohu power lines and hundreds of industrial enterprise communication infrastructure and the country’s energy industry, Tajikistan into a united territory.

At the same time, we were able, with the support of peace and the wholehearted support of the people of the country, political stability and national unity restored in their homeland, and to make favorable conditions for peaceful life of our people.

Now confused, unstable situation in the modern world and the tragic life of some nations each sending a citizen with all realized thanks to that found from the blessing of peace and stability to what a great favor.

At such times, we are willing to happy celebration of independence, indicating the fundamental achievements of the government and the people is necessary.

Because of the inherent conflict of geopolitical interests of the world powers, the tendency to separate military and political poles of the world, the spread of destructive and extremist thinking, quvvatgirii ekstremistivu terrorist activities and movements as they faced a serious threat to stability and security in the countries of the world, in general.

Therefore, with an indication of the fundamental achievements of independence would once again like to emphasize this point, extremism and other modern threats and challenges, first of all, threatening the same principal and vital values.