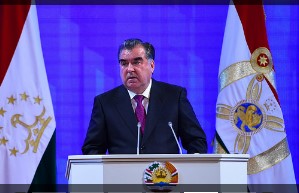 During the presentation of the message, Nation Leader, President of the main directions of domestic and foreign policy of the Republic of Tajikistan for the current year and subsequent years, he paid special attention, along with other important issues in the field of social welfare. gradual improvement of social condition of the population in the difficult conditions of the political economy of the region and the world was assessed one of the most important functions of state government. It was noted that despite the impact of political and economic Union crisis and increasing pressure on the national economy with low aspirations endeavor to provide honored makroiqtisodi indicators, and in this context, the poverty level in the country to 31%.

Leader of the nation refers to the issue of employment, in particular, noted that in 2015 in the framework of public-sector programs was established more than 205 thousand new jobs. According to the head of state of state regulation of labor relations, employment, creation of new jobs, vocational training and migration of the population to social stability and living standards of the population has a direct impact.

– Implementation of state programs to promote employment opportunity has been created in the last 10 years, more than 1 million permanent jobs, temporary and seasonal, only through state employment agencies to provide employment to 315 thousand jobs, – stated The president of the country and added that 30 percent of them women.

At the same time, national leader of the Ministry of Labor and Employment, education and science instruction, to strengthen the professional training of citizens and migrant workers to make vocational training process according to international standards and the actual needs of the labor market.

The head of state also said that given the current situation of domestic and foreign labor market and employment provide a greater number of citizens, the Ministry of Labor and Employment and other ministries and departments, heads of regions and cities, organizations and enterprises, regardless of their form of ownership they, as well as entrepreneurs, is responsible primary schools and vocational secondary action, using all the resources and opportunities for creating new jobs, and to set up training courses additional measures profession and language of migrant workers.

After the President’s speech the Ambassador of the Republic in the Russian Federation Powered held the award procedure for activities related to the implementation of the relevant country ʙandxoi message consultation plan.

It was noted that in a speech to the nation Leader strengthening partner relations with the Russian Federation as a strategic partner of one of the afzalijatxoi evaluation of foreign policy, and this factor, in turn, our responsibility, more formal representations in the development of relationships in the development samtxo.
In the margins of the message in the Ministry of Labor Representation Office, Migration and Employment of the Republic in the Russian Federation on migration was also held meeting. Head of the representative Showing Mirzoev comments relevant points of a message representative, stated that the annual plan of activities, taking into account the instructions of the Head of State related to labor relations, with the use of domestic potentials to contribute to the process of employment, labor migrants abroad and learning about their professional qualifications requirements the host country labor market cavoʙgu and protect the interests of migrants xuququ are compiled.

– On the basis of this plan, priority will be given to ʙokorta’minkuni issue of migrants and retraining, – stated Z.Mirzoev and depending on the nature of the specific orders represented employees.